Health insurance rates for individuals will rise next year at three of four health insurers that do business in Western New York.

The New York State Department of Financial Services has released final rates for 14 health plans across the state. According to the list, the parent company of BlueCross BlueShield of Western New York – Healthnow New York – requested and received a decrease of 3.2 percent for individual rates. But rates for the other three insurers will rise from 0.6 percent to 13.7 percent.

Amherst-based Independent Health’s 2019 products will increase an average of 0.6 percent for individuals. That’s a big drop from the 21.3 percent rate hike the company requested in response to the federal government’s late 2017 repeal of the individual mandate tax penalty, which required most people to carry health insurance or pay a penalty. 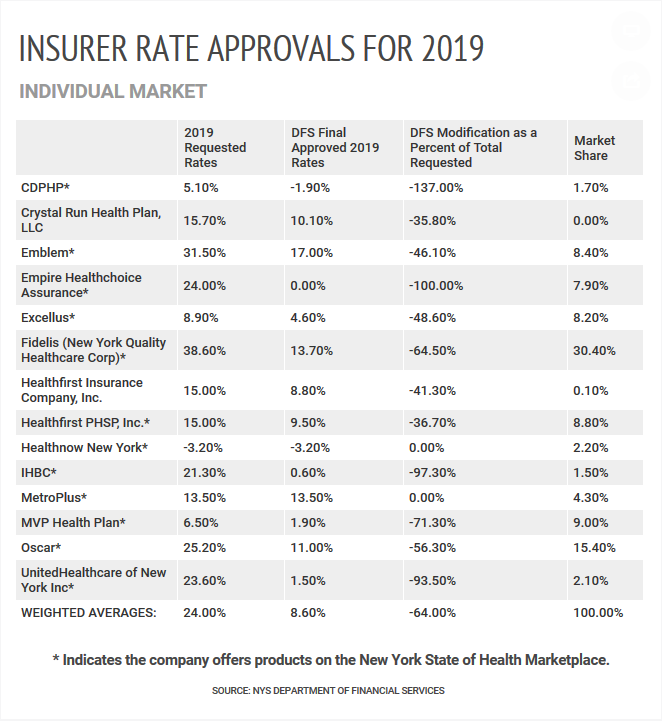 “We are perplexed by the change to our individual rates as we thoroughly analyzed the potential impact the elimination of the individual mandate would have on 2019 premiums,” Independent Health chief marketing officer Nora McGuire said in an email. “With the removal of the mandate to get coverage, we projected that fewer healthy people will likely sign up for coverage.”

Univera Healthcare’s rates are grouped with parent company Excellus Healthcare. Individual rates for that health plan are set to rise 4.6 percent, down from the requested rate of 8.9 percent.

And Fidelis Care’s rates will climbed the most – 13.7 percent, down from the requested 38.6 percent.

DFS said it reduced health insurers’ 2019 requested rates for the individual market by 64 percent overall, saying that will save consumers $314 million. The regulator also reduced requested rates for small group plans by 50 percent, citing a savings of $279 million for small businesses. Both reductions were aimed to respond to what DFS called “a sustained attack” by the federal government on the Affordable Care Act.

“DFS will not allow the federal government’s wrongful repeal of the individual mandate penalty to become a self-fulfilling prophecy to make health insurance unaffordable in New York,” DFS Superintendent Maria Vullo said. “DFS has carefully examined the rates requested by health insurers and scrutinized every factor from an actuarial and market standpoint to ensure that the Trump Administration’s many effort to sabotage affordable and comprehensive healthcare coverage do not allow insurers to unfairly profit at the expense of consumers.”

The New York Health Plan Association, a trade group for health insurers, said in a statement: “Rising health care costs remain a challenge for New Yorkers, but the rate review process should be free from political considerations, focused on economics and actuarial data. We are concerned about the impact the rate reductions will have on the stability of the marketplace and may necessitate higher increases in future years.”